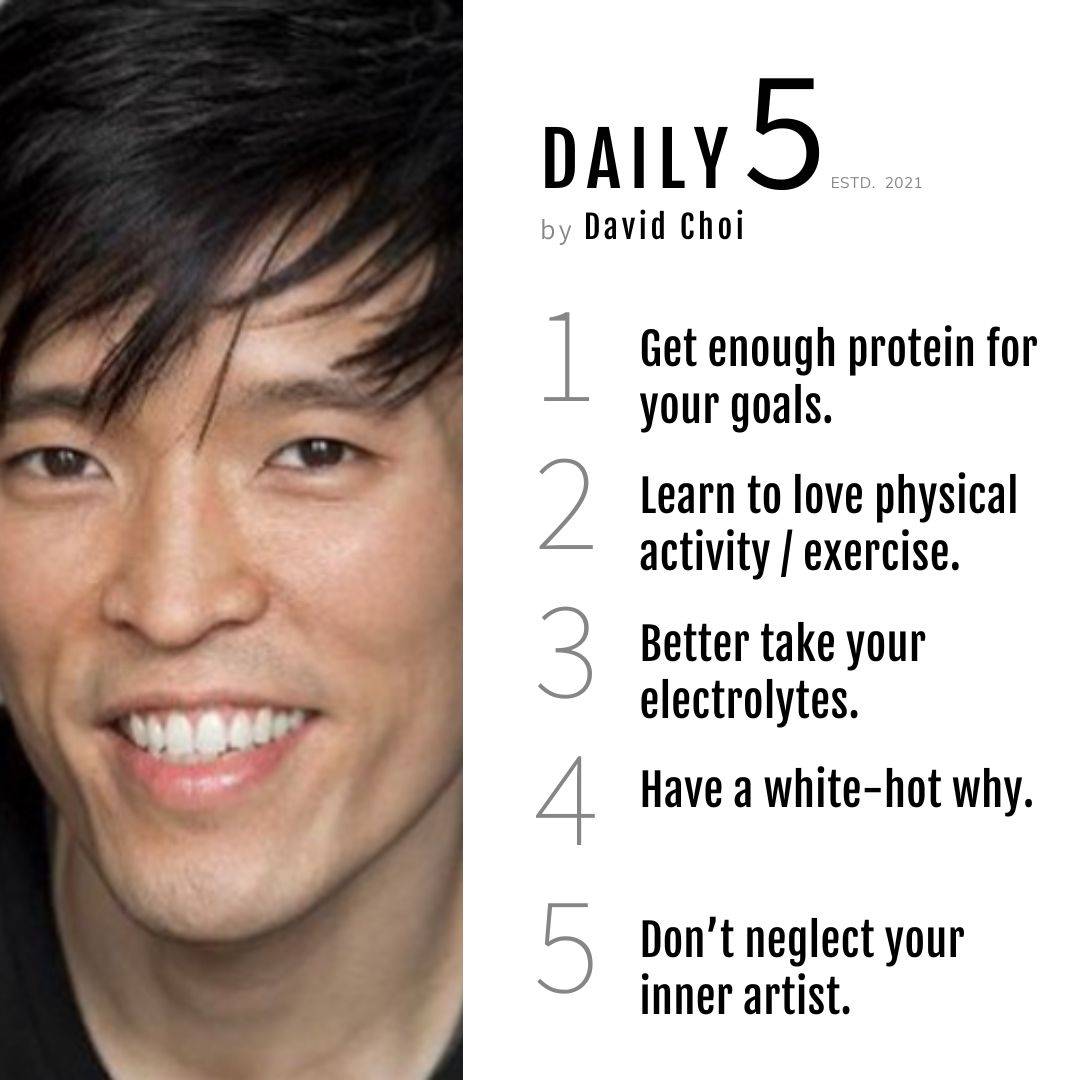 1. Get enough protein for your goals.

Meeting your protein requirements is a lot easier said than done because everyone’s requirements will differ based on his/her/their lifestyle. If you’re a typical athlete that trains 4-5 days a week, you may want to consider supplementing with protein shakes (i.e., Whey + EAA, etc.). Here’s a great video by Jeff Nippard that covers the topic well.

There’s an old adage that you don’t stop dancing because you get old; you get old because you stop dancing. The same goes for exercise. The day one decides to “retire” from work/training will invariably be the beginning of his/her mental and physical decline. So the hack here is to find an exercise/activity that gets you out of bed in the morning. Usually it’s group fitness or a competitive sport–for me it’s CrossFit. Whatever your sport, the goal is to stay engaged to a point that you don’t even realize you’re exercising. Watch this great video by Yes Theory on how some of the oldest people on Earth (i.e., Blue Zones) survive and thrive past 100 (hint: never stop exercising).

With all this heat this summer, I’d be remiss if I didn’t tell you to take your electrolytes before/during/after your training sessions. This is way, way more important than eating your Wheaties! Your body is a glorified battery with electrical charges running through your muscles, organs, and nerves. And you need salt and other electrolytes to allow water to be shuttled in and out of your cells for proper hydration. Without them, you’ll feel like you’re swimming in molasses. Not to mention you’re more likely to injure yourself. Here’s Dr. Berg in an explainer video on electrolytes.

Switching gears to mindset, dig deep and find your North Star. Maybe it’s from your childhood, or maybe due to something happening in the world today that you can help improve. I grew up in a tough environment. I had a hardline father who suffered from Type 2 Diabetes (because he never exercised), making him an even angrier and depressed man. He passed at 75 having suffered greatly from sarcopenia and other complications during his final 30 years. When they say that optimal health is 80% nutrition and 20% exercise (let’s be real, it’s really more like 50/50), they should also tell you that without that 20%, you will live a severely degraded quality of life and you will bring tremendous suffering to yourself and everyone around you. I had a sister who was misdiagnosed at the age of four with intestinal cancer and was administered chemotherapy for something she didn’t have, irreversibly damaging her heart muscle. At 13 she had heart failure, then a heart transplant, was in a coma for several weeks, then lived six more years and finally succumbed to a bout with breast cancer brought on by the side effects of all the medications she was taking. She was 20 and I was 17 when she passed. I do what I do for them and all the people that I want to help so they never have to experience what my sister and father did.

By age 35, I was beaten down, depressed, and lost in my life after living a typical tech-entrepreneur’s fast life for 10+ years. At 21, I raised my first $4 million dollars for my first Internet software company. In my late 20’s, I consulted in Corporate America, working gigs so I could save up enough money to launch my next venture. And while technology served me well professionally, I always knew I had a story to tell and it wasn’t going to come out through some new internet startup. I needed a stage, a mic, and a spotlight. I dreamed of being on the TED stage one day telling the story of how I did my part in ridding the world of chronic metabolic disease. But how could I get there from the Bloomberg desk I was sitting in? In between contracts, in the summer of 2013, I decided to take my first acting course and begin my journey as an artist. The work initially brought tears of frustration and questions of my own acting ability. Trying to get comfortable being vulnerable and naked on stage (literally and figuratively) was scary as fuck. But I kept going, diving deeper into the craft, studying films and actors, producing films, writing scripts, and eventually accepting awards for my years of training and toil. I’m reminded of the saying, “If it was easy, everyone would do it.”I say this is almost everyone: pursuing acting can have outsized benefits in life, even if you never expect to be in Hollywood. It will make you a better listener, more empathetic, more human. And it’s terribly therapeutic as the act of releasing all the pent up emotions in a safe space with imaginary circumstances can be hugely cathartic.

Be a consummate giver. I’m headed back to Burning Man this year where one can free their mind and experience something that doesn’t exist anywhere else: a gifting economy. A place where people give and give with zero expectation of anything in return. The idea is that if everyone comes with an abundance, then everyone’s needs will be fulfilled. Once you experience this for yourself, you’ll likely evolve into a giver’s giver. So forget what you think you know about Burning Man and give it a proper go!